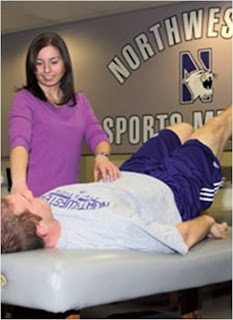 When given the opportunity, athletic trainers would love to have input on the creation, design and implementation of a new athletic training room. A new “home” for athletic trainers could be realized via newly constructed buildings or through renovation of existing structures.
Many components are beyond the building personnel’s input since they are dictated by local, state and/or federal coding statutes. For example, the federal Americans with Disabilities Act require a certain amount of floor space and free space for wheelchair accessibility which may alter plans for lavatory and rehabilitation spaces.

There are a few common themes that should be considered in the development phase of the floor plan.

One of the main concerns is how athletes will enter, leave, access and utilize the area without creating blockage, overflow or compromise activity within the room. Placing the “need to get to first” activities such as signing in and practice preparation taping nearest to the door can control or eliminate a headache-producing traffic pattern. Look at your design and imagine 12 athletes arriving at your door at the same time—how will you control, organize or separate the crowd?

Placing other activities such as treatments, hydro modalities, rehabilitation stations and administration work stations in non-intertwined locations will make the room more efficient and productive. It will also promote safety for the athletes using the areas.

Having the necessary tools-of-the-trade conveniently located is critical. Obviously the day-to-day items are near their proper location, but where are the “once-in-awhile” ones located? Can you turn around and walk 5-10 feet and find them or do you have to go down the hall to the storage room to find them? Being able to install containers or storage units that are available but not intrusive can be very useful.

When designing a facility, ready access to whatever system of communication and emergency equipment your organization uses in vital. How many phones do you want hanging on your walls and where do you want them? Which phone(s) is restricted to local or campus? Which one(s) can make calls anywhere? If you use walkie-talkies, where will they be stored and who can access them?

Where is your automated defibrillator stored? How many do you have immediately available? Is there one in the athletic training room, outside the room in the hall, is it stored conveniently or stored in a room that is occasionally locked?

If you have oxygen, backboards, or intravenous supplies, are they stored open or locked? Who is authorized to use them and can they get to them in an emergency?

Every athletic trainer has occasions when speaking with a parent or an athlete should really be done in private. Given the chance within your planning, include an office area which actually has windows for viewing the entire room as well as a door that can be closed if the situation dictates it. This reduced noise area also makes administering a neurocognitive assessment test on the computer to a single concussed athlete more easily accomplished than having to locate a quiet computer somewhere in the building.

Many of the items mentioned plus tables, cabinets, storage carts, ice machines, whirlpools and other modalities can be found at www.esportshealth.com.

Phil Hossler, ATC has been an athletic trainer on the scholastic, collegiate and Olympic levels. He has authored 4 books and numerous articles and served as an officer in state and regional athletic training associations for 20 years. He is a member of four halls of fame including the National Athletic Trainers’ Association’s.
Posted by Sports Health at 10:05 AM 1 comment:

61 Famous Athletes with Diabetes + Tips for the Diabetic Teen Athlete

About the Diabetic Teenaged Athlete 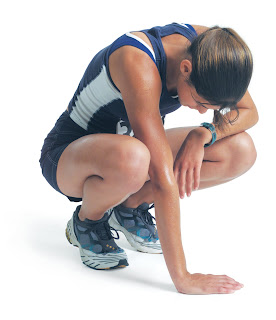 Glucose is the primary sugar circulating in your blood. Normally, after a meal, food gets digested and broken down into easily absorbed molecules, glucose being one of them. Glucose is a simple sugar that comes mostly from the carbohydrate that you eat. It must be present in your blood in sufficient quantity that your brain and nervous system can take it up and use it as their primary fuel.

Teachers, coaches and parents all encourage teens to eat breakfast because “breakfast” is actually “break” and “fast” which means morning blood sugar levels are low due to the fast of not having eaten overnight.

Not good qualities to have during school or sports!

Exercise is very useful to diabetics as it assist in mainlining good blood glucose control. A successful diabetic teenager who is also an athlete must become very good at organizing and preparing for the unexpected.

The interplay between insulin therapy, diet, and exercise is extremely important to athletes with diabetes. The goal is to match the type, amount, and timing of insulin to food intake and activity level. Regular monitoring of blood glucose levels is critical to ensuring that appropriate amounts of insulin are provided and metabolic complications are avoided. When insulin levels are not in balance with need, abnormalities in blood glucose and acid concentration can occur. By adjusting your insulin dose depending on the length and intensity of exercise, control of blood glucose level can be enhanced.

This is a subject you’ll want guidance on from your physician.

Including carbohydrate-containing foods with a low glycemic index can assist with blood glucose control.

Young diabetics have a great deal to learn about the disease, exercising demands as well as rest, fluids and the type /amount of food eaten.

Exercise is important for all of us, but it is vital to diabetics.

Learn about the condition, speak with your physician often and don’t be afraid...athletes with diabetes have competed successfully on all levels.

Use http://www.diabetes-exercise.org as a beginning point for information and Sports Health for diabetes supplies.

Phil Hossler, ATC has been an athletic trainer on the scholastic, collegiate and Olympic levels. He has authored 4 books and numerous articles and served as an officer in state and regional athletic training associations for 20 years. He is a member of four halls of fame including the National Athletic Trainers’ Association’s.
Posted by Sports Health at 7:15 PM 10 comments: 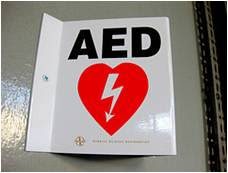 Understand and Prepare for Sudden Cardiac Arrest Before An Emergency Occurs

Sudden Cardiac Arrest (SCA) is caused by sudden failure of proper heart function during or immediately following exercise. This often occurs with no known trauma. Since the heart loses its ability to effectively pump blood, the athlete quickly loses consciousness and will die. To stop this tragic cascade of events, normal rhythmical pumping of the cardiac muscle must be quickly restored using an automated external defibrillator (AED).

How Often Does SCA Occur and Who is Most at Risk?

Fortunately this tragic event is considered rare, happening about 100 reported times per year in the United States. The chances of a high school athlete suffering frame SCA is reported to be 1:200,000. SCA is more common in males, football, swimming and basketball and in African-Americans than in other races.

Heart Problems Are Difficult to Detect in High School Athletes

Typically, the athlete presents no symptoms of cardiac problems. The problem is caused by one or several cardiovascular abnormalities and electrical diseases of the heart that go unnoticed in healthy-appearing athletes. The most common cause is hypertrophic cardiomyopathy (HCM) which is an enlargement (hypertropci) of the heart muscle (myopathy) producing a thickening of the heart muscle which can cause serious heart rhythm problems and blockages to blood flow. The second cause is congenital abnormalities of the coronary arteries.

Warning signs to watch for include:

What steps can be taken to prevent tragedy during the annual pre-participation examination?

Is There Any Tests That Can Detect These Heart Conditions?

Dr. Mark Russell, a pediatric cardiologist at the University of Michigan's C.S. Mott Children's Hospital, said no one screening test is able to detect the "several different heart conditions that can cause sudden death in a young athlete." EKGs may catch some defects, the echo others, while other problems may only be revealed in an exercise stress test.

How Can I Protect My Athletes?

Since detection can be elusive, consider the places where your athlete engages in activity - the swimming pool, the field, the gym, the weight room, the visitor's field - and consider having an AED available in these places to protect from the unexpected.

More blogs on the use of AEDs in schools >>

Articles That Make the Case for Placing AEDs in Schools: