The Popularity of Tennis and Products to Make You More Comfortable 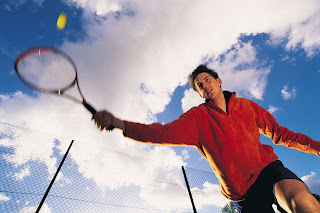 "According to data just released by the Sporting Goods Manufacturers Association (SGMA), tennis is the fastest growing sport in America among individual traditional sports with an increase in participation of 43 percent from 2000 to 2008. According to the SGMA, tennis was one of only six sports to experience participation growth exceeding 40 percent from 2000 through 2008. Tennis is well ahead of other traditional sports like baseball, ice hockey, gymnastics and football, all of which suffered a decline in participation during the past eight years. In the last year alone (through December 31, 2008), tennis experienced a 9.6 percent growth in participation." Read more >>

"The game of tennis is the same everywhere. The name given to the game differs in different countries. In Great Britain it is called Tennis or, to distinguish it from Lawn Tennis, Real Tennis or Royal Tennis. In the USA it is called Court Tennis: in France Jeu de Paume (hand ball): and in Australia Royal Tennis. The various names throw light on the development of the game. Tennis was played in 5th century Tuscany when villagers used to strike balls up and down the streets with bare hands." Ready more >>


Injuries can occur and should be dealt with rather than allow them to linger. When in doubt as to what or how serious your injury may be, seek medical attention. (Read - "How To Identify and Treat Tennis Elbow - and When to See a Doctor" Remember "ice is nice and hot is not" so always apply cold initially to those aches and pains. Typically ice is applied for 10-30 minutes depending upon individual tolerances and then removed for 30-60 minutes.

When looking for a variety of products to assist, care for, relieve and support, shop Sports Health Tennis products >>

Posted by Sports Health at 8:00 PM