Earlier this year, Sports Health launched “A Day in the Life of an Athletic Trainer” photo contest, giving Athletic Trainers the opportunity to submit a photo illustrating what happens during a typical day on the job. We received a great variety of entries, all of which can be viewed in the Sports Health Facebook Album.

Sports Health selected two Athletic Trainers to be the judges of the photos. Participating judges were Phil Hossler, MS, ATC from East Brunswick High School in New Jersey and Tory Lindley, MA, ATC and Director of Athletic Training Services at Northwestern University. Each judge ranked their top three nominations and the winner was the highest combined ranked nomination from each judge. The runner up was randomly selected from the remaining nominations. 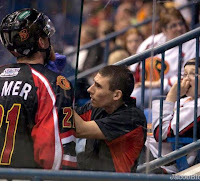 Congratulations to Matthew Aiello, ATC (pictured right) who won 1st place and the $5,000 award with his action shot of treating one of the Bloomington Blaze pro hockey players during a game.

Connie Fernandez, MAT, ATC, LAT received the runner-up award with an image of a baseball player being checked out on the field. Connie is the Assistant Athletic Trainer at Calallen High School in Corpus Christi, TX. View photo>>

A few additional notable entries include:

A humorous graphic of people’s perceptions of an Athletic Trainer’s job. View photo>>

A close-up action shot of a wrestler being treated at Pelham High School in NH. View photo>>

To show our appreciation of the time and effort that went into all of the photo submissions, Sports Health will be sending a $100 gift card to each entrant! We would like to thank all of the teams, schools, Athletic Trainers and athletes who came together to create this powerful collection of images.