About Sickle Cell Disease and Athletes 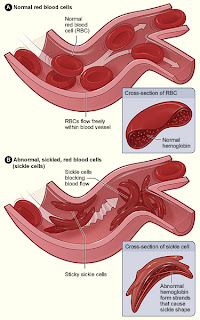 Sickle cell trait needs to be identified in athletes

Sickle cell disease (SCD) is a condition in which  red blood cells can develop a “C” shape similar to the old farm tool called a sickle that was used to harvest grains. The danger of the “C” shape blood  cells is that they die early which causes a shortage  of red blood cells. Due to their non-round shape they can also become stuck and clog smaller blood vessels resulting in pain and other complications.  Tissue that does not receive a normal blood flow eventually becomes damaged. This is what causes the complications of sickle cell disease. Read more: http://www.nhlbi.nih.gov/health/health-topics/topics/sca/

SCT affects 1 in 12 African Americans in this country. Estimates are that 3 million people in the United States have SCT and many are unaware of the condition. SCT is also frequently found in people living in or have families in South and Central Americans, Caribbean, India, Arabia and Mediterranean counties such as Turkey Greece and Italy.
Chances of Inheriting SCD or SCT

How do you know?

A simple blood test is used to detect SCT. For several decades now blood testing for sickle cell and other blood conditions has been standard on newborns. Families with inherited SCD and SCT tendencies should see a genetic counselor (contact your family physician or local hospital) to investigate the number of relatives on the husband’s and wife’s side of the family who are carriers before deciding on having children of their own.

Knowledge of medical problems possibly associated with sickle cell trait and their appropriate management is good clinical practice for athletic programs so check with the school physician and/or the athlete's physician.
Posted by Sports Health at 5:00 AM