How to Save a Young Athlete’s Life: Pre-screen with an ECG 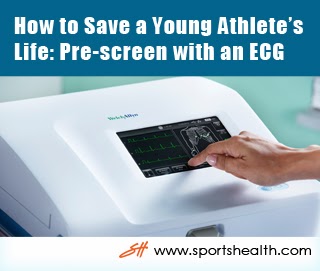 The Case for Using an ECG to Screen for Cardiac Disorders.

Each time a young athlete dies of a cardiac-related incident after athletic exertion, the debate over athletic pre-participation screening is reignited. The loss of a seemingly healthy young athlete to sudden cardiac death (SCD) is a jarring event that leaves people questioning what could have been done to prevent the tragedy. Cardiomyopathy leading to ventricular arrhythmia and SCD is actually the second leading cause of athlete death behind trauma. While SCD is rare, the statistics cause concern: almost 80 percent of athletes who die of a cardiac-related incident showed no symptoms prior to their death, and over 90 percent of SCDs in young athletes occur during or shortly after exercise. The NCAA estimates that nearly a dozen college student-athletes in the U.S. suffer sudden cardiac arrest each year.

The Gap in Current U.S. Recommendations


Current American Heart Association (AHA) standards do not recommend routine pre-participation screening for athletes, citing expense, burden to the healthcare system and false positive results. Rather, the AHA suggests use of a screening tool that includes 12 questions about personal and family medical history and a physical exam to identify aspects of an athlete’s health that could signal a cardiovascular problem.
But what about athletes who are not aware of, or do not have access to, extensive family history or who are reluctant to report these potential health issues for fear of being excluded from participation in their sport?
In 2005, the European Society of Cardiology recommended universal screening, and this position has been endorsed by the International Olympic Committee. Israel also requires ECGs as part of athletes’ pre-participation physicals (PPE).
These pro-screening policies are largely a result of a population-based study conducted in Italy which examined the athletic and nonathletic populations between the ages of 12 and 35 years. The annual incidence of SCD in athletes decreased by 89 percent between 1979 and 2004; whereas the incidence of SCD among the nonathletic population did not change significantly. Most of the reduced mortality rate was due to fewer cases of sudden death from cardiomyopathies.
Recent research supports the viability of screening with ECGs, despite concerns about cost and false positive results. A study commissioned by the NCAA screened 2,471 athletes from 14 NCAA Division 1 universities who had not previously received an ECG screening. Seven athletes were diagnosed with serious cardiac disorders, all of whom had abnormal ECGs, but only two of those athletes had an abnormal history or physical exam.

A Trend Toward Cardiovascular Screening in the U.S.


A recent survey of head athletic trainers in NCAA Division 1 football programs found that 35 of the 116 schools were already incorporating non-invasive cardiovascular screening (NICS) in their PPEs.
As the trend in the U.S. moves toward a more proactive approach to screening, and with mounting evidence pointing to the value of screening athletes with ECGs, perhaps athletic trainers and programs should consider partnering with contracted medical staff, or better yet should invest in an onsite ECG, like the ones found on Sports Health to have ECG testing readily available. After all, it could mean the difference between life and death for a young athlete.